A Refuge of Solitude

A Refuge of Solitude
Glen Canyon, Arizona.
If you’ve been here before, it doesn’t take long for the desert to bake back into you, to be lulled into a sense of culture with it. All the shapes and patterns in the rock find their way into native american weavings and pottery, all the colors into the pastels of southwestern architecture. You smell it in every breath, you feel all of its extremes. I never would have come out here had I known how much I would mourn its loss. It’s not the same anymore…the crowds are overwhelming, the disregard and rudeness perpetrated on the landscape is too senseless. A sacred place should soak into you, giving up its secrets slowly. There is an exchange of trust. But much of the land won’t show us it’s beauty anymore, after being graffitied by narcissistic morons, shocked by unnecessary noise, and trampled by selfie trophy hunters who only want to be there to say they were. Some years ago, on a hunch, my brother and I followed a non-descript track near Page. We parked in a wide spot and climbed up some promising slick rock to a plateau we had glimpsed from the highway. Hidden up here was a garden of Navajo sandstone. Domes and buttons of rock were everywhere, waiting to be seen up the striated slopes and on top of mini-buttes. Candy cane swirls drained into pools, dry now, but waiting to fill with the rains of monsoon season. This spot was not a secret, but neither was it on a map or in a guide book, and there was none of the usual evidence of visitors. And so it became our secret spot to return to over the years, a place we could pretend we didn't have to share, a rare find in the southwest these days. We never saw another human there. It held silence so intense you could hear the workings of the wings of ravens. It was a refuge of solitude. I am thankful I saw so much of the west before it was overrun; I feel some small portion of what the indigenous must have felt with the great anglo migration. On our 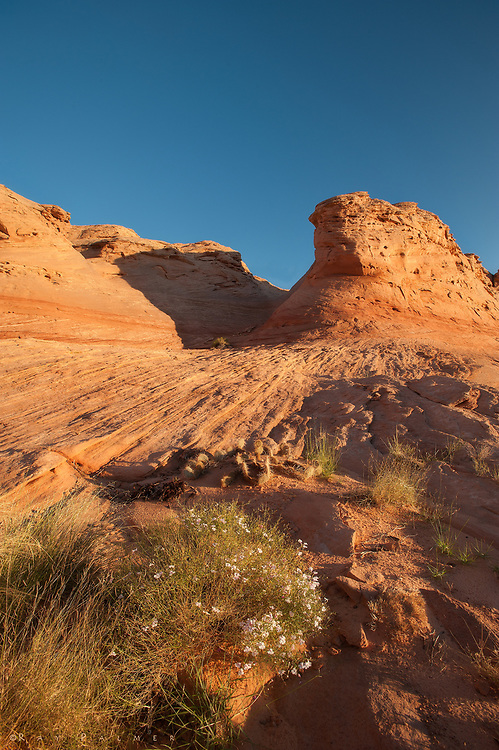