Christ Church, Cooperstown, NY.
Too often, I've had things happen to me in a timing which I found more than coincidence. Some years ago, I skipped a birthday party I would normally attend due to a leak in the basement of a house I rented, and waited for the landlord to call back. A friend from the party came to help, so we began taking the pipe apart. When I went outside to remove the faucet and pull the cut piece in, I saw a strange light. I went to the end of my porch and peered down the other side of my house, at the light, that was reflecting off the neighbor's house--the chimney on my house was engulfed in flames. I ran to the front of the house while my friend called 911, to beat on the door of the other tenant, who had fallen asleep after lighting a fire, and had no clue he'd set the place on fire. It ended well, mostly smoke damage, but I could have lost everything. Believe what you will, I can't help but wonder at the sequence of events that had me at home that night--even down to the coincidence that I just happened to find the leak, as I didn't frequent the basement very often.
I just happened to see the blossoms and tulips driving by, through the stone archway at the end of the path. I came back looking for a picture through the arch, but it wasn't there. Coming into the graveyard and this color pallette of tulips, blossoms, and brick, I knew I'd stumbled into a scene where nature comes together but for a short while. The scene coalesced here after much searching: a trinity of openings in the canopy to reveal nave, steeple, and cross. We KNOW that seasons will change and spring will come. We TRUST that the elements of the scene will come together because the seasons have changed and spring has come. But consider: this year, a year later almost to the day, I returned. For some reason the tulip beds only stretched halfway down the lane, the rest dug up; somehow, the blossoms and canopy didn't gel the same. Maybe I just happened to see my v 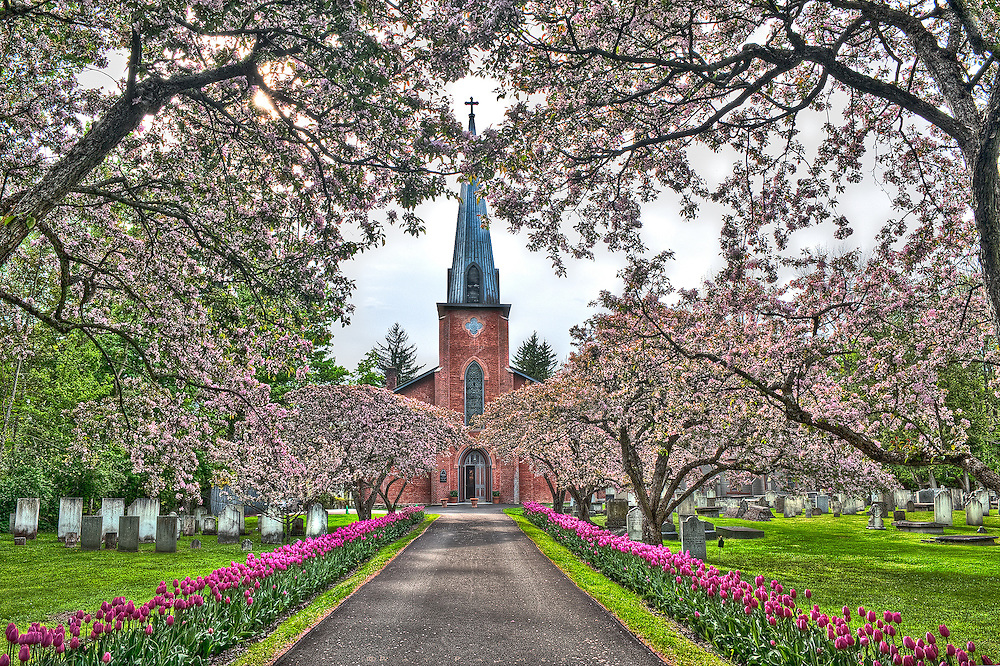