Marion River, Adirondacks, NY
_RP17143-4413
The Open Space Institute bought the land, and then helped facilitate state ownership through a public proposition to be voted on in last year's elections. In exchange for state ownership of the corridor, disputes that had been hanging since the 1800's between landowners and the state in Hamilton County would give landowners clear title in exchange for any claims on the river land, and so preserve the waterway between Utowana and Raquette Lakes. To avoid the first part of the Marion River, which is not navigable, a canoe carry skirts the rapids that start at the end of Utowana Lake. My small part was to provide some images to be used in advertisement urging a Yes vote on Proposition 4.
Autumn fizzled early before I was contacted by the Institute. Bad weather and a kidney stone hampered my efforts, but I finally got a window this day. My thoughts, with the color gone, were that I might be able to get a workable shot at the edges of the day, and so I arrived an hour or so before sundown to traverse the Carry. I arrived here, at the end of the trail, the put in to ride the river south. The mountainside and bend below me were bathed in the light of sundown, while my end was already in shadow. It's not fair to tease the explorer with a scene that lies beyond, so I guess this is the perfect place to re-enter the water. Had the trail continued, I'd have been drawn down there despite the hour...I'll be content to know it will still be there when I get a paddle. This is a composite of two images, exposing for the extremes. 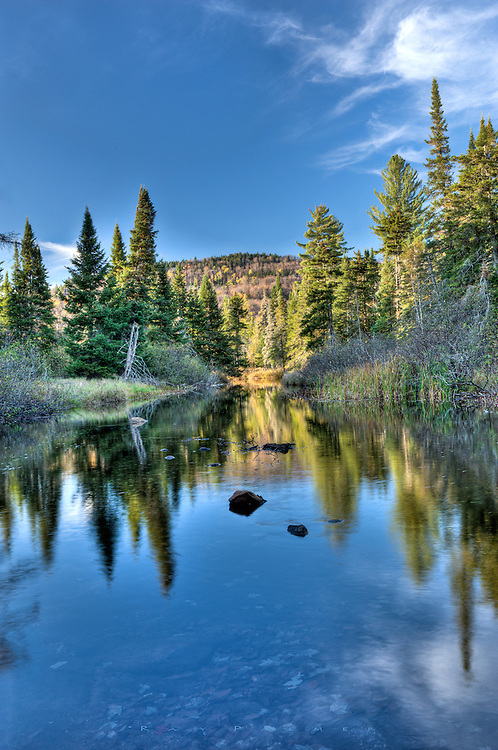